Consider the following simple example. Let f be a function of two variables defined by:

Let us define a function F of two variables by

Then we can calculate

With the obvious intentions regarding the partial derivatives

we can also calculate 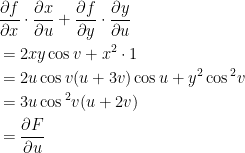 It can also be checked that

These two results are indeed true for a general function

. They are regarded as a generalisation of the chain rule for one variable. Again

are often confusingly written as

The rule is then

It is very important to remember what is meant by all these items.

Note the chain rule can be used both ways.

(substituting for u and v in terms of x and y)

and, of course, we put F as f throughout.

These results are special cases of the so called general chain rule.

If we have a function

where x are substitutions

. We are used to wring such things as:

.  For example we would write

Equally well, of course, it would be true to write

The meaning of (i) and (ii) are mathematically precise.

means the derived function and

means the value of

can be more devious.

It can simply be taken as synonymous with

When such is the intention it would be indisputable that

But there are other more shady uses as we will see.

to define a function F defined as

Note that F is not equal to f, but mathematicians frequently write the chain rule as,

which is after all

as defining a function g given by

and we see the chain rule as saying

Of course the u here is an entirely dummy symbol.

Consider the curve in which the surface

would be a formula for the gradient of the tangent to the curve.

with respect to x, treating the y as if it was a constant (some say holding y constant), the the derivative obtained is called the partial derivative of

with respect to x and we write

With functions of more than two variables one differentiates with respect to one of the variables by holding all the other variables constant.

In the obvious way we can have higher order partial derivatives.

From here on we may assume that all the mixed derivatives are equal.

We can say that

If, intuitively speaking, by going close enough to (a,b) we can get f(a,b) as close as we like to L.

Just as with one variable limits from below and above may be different, with two variables we may get various limits coming in from different paths.

If we come in along the line

To specify such functions we must have both a rule, and a domain.

for which the rule makes sense.

may be drawn in the usual way. (ie. (x,y) in the horizontal plane called the xy plane, and z moving along a third, vertical axis.

For obvious reasons informative graphs are often quite difficult to draw. It’s often useful to draw profiles of f, that is the surface curves where their surface meets planes parallel to the coordinate axis.

Another useful diagram of f(x,y) is that provided by drawing the contour lines (or level curves). That is we sketch in the x,y plane the graph of y=f(x,y) for various values of z.

we can not sketch profile, and the best we can do is sketch level surfaces.

for any possible integer m we care to choose.

So it can be said that

increases more rapidly than any power of x.

So it can be said that

increases more slowly than any positive power of x.

– so an odd function.

– so an even function. 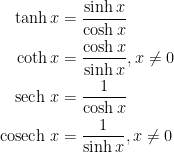 Derivative of sinh and cosh

means the real number whose

means the real number whose

is not an injection, so we need a cut down domain to non-negative x’s (

means the non-negative real number whose

Derivatives of the inverse hyperbolic functions

Series definitions for the sin and cosine functions are:

If we differentiate these term by term we can see that:

Many other properties can be deduced from these power series.

We can see that sin is not an injection (domain of

) and so there is no inverse. However the function

[called the cut down sine], has the graph:

and this is an injection, and has an inverse function

is the unique real number (angle) between

whose sine is x. The

is a reflection of

(cut down) in the line

is true, you may deduce

is true, you may not deduce 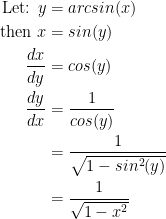 We take the positive square root because for

, and the cut down tangent with domain

. The inverses of these functions are arccos and arctan.

This website is my attempt to write up my notes from my degree in Maths I took a long time ago.

It is ongoing, it will take a while.